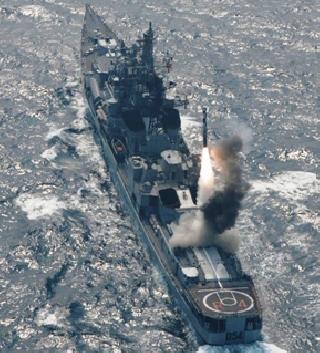 VISAKHAPATNAM: Today at 0930 hrs BRAHMOS supersonic cruise missile was successfully flight tested from Indian Naval Warship in vertical launch configuration off Vizag coast in the Bay of Bengal to a full range of 290 kms.

The missile blasted off in a pre-designated war scenario taking a "double-manoeuvre in S-form" hitting the designated target ship just one meter above water line. The sheer velocity and power of hit made the missile rip through the ship's hull.

This is the 34th launch of BRAHMOS which just followed the successful October launch from INS Teg in the Arabian Sea.

The BRAHMOS missile system was inducted into the Indian Navy in 2005 when it began arming the Rajput-class guided missile destroyers and inducted subsequently in many warships. For Indian Navy, BRAHMOS is the main attack weapon with high-precision, devastating power and supersonic speed without any competitor.

BRAHMOS is already inducted into the Indian Army in two regiments and is the mainstay of the artillery. The Indian Army is the only armed force in the world to have land-attack supersonic cruise missile capability.

The missile is known for its fastest reaction time from cold stage to launch readiness within few minutes and once the target data is acquired and transmitted to the onboard computer, including expected countermeasures in its path, the most optimal trajectory is given to the commander by the Fire Control system of the weapon complex.

Once selected, the missile takes off in the designated path with high accuracy which is constantly updated by the Satellite Navigation System.

BRAHMOS is capable of acquiring data not only from the American GPS but also from Russian GLONASS system which ensures double redundancy. In the last stage the seeker takes over and the target is located with accuracy of few meters which guarantees no chances of survival for the target. This has been proved once again today with bull's eye accuracy.

Defence Minister Shri A. K. Antony congratulated the Ship commander, Indian Navy and the BrahMos team for this excellent demonstration of capabilities, which has ensured that no adversary can approach Indian waters with wrong intentions.