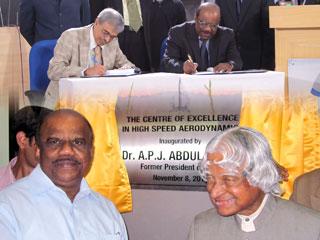 BANGALORE: In honour of former President of India and distinguished scientist Dr. APJ Abdul Kalam, BrahMos Aerospace on Tuesday inaugurated a Centre of Excellence in hypersonics at the prestigious Indian Institute of Science (IISc), Bangalore.

BrahMos Aerospace, a Joint Venture company between India and Russia and the producer of world class BRAHMOS supersonic cruise missiles, had signed a Memorandum of Understanding with IISc on 12th June, 2011 in New Delhi to establish a Centre of Excellence in High Speed Aerodynamics.

Speaking on the occasion, the chief of BrahMos Aerospace, Dr. A S Pillai said, "The new Centre of Excellence at IISc will pave the way for young and bright scientists from all over India to undertake research and development in the field of high speed aerodynamics.

"This will lead to the development of the advanced BRAHMOS-II missile system and reusable hypersonic vehicles for space missions," he said.

Speaking at the event Dr. Kalam said, "The Centre of Excellence will bring together the strength of BrahMos and Indian Institute of Science with the mission to promote development of world class systems and technology, which is a significant step towards national development."

IISc, Bangalore is India's premier science and research institute. It was established in 1909 and collaborates with the country's leading defence and aerospace agencies as well as private research labs in the area of R&D.

The faculty and alumni of this institute have been responsible for establishing and spearheading many new institutions and programmes across the country.