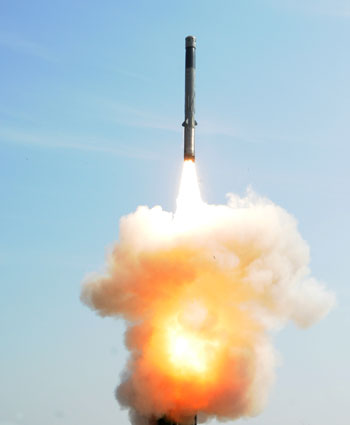 POKHRAN RANGE: An advanced version of the BRAHMOS supersonic cruise missile system was successfully test fired by Indian Army at the Pokhran range of Rajasthan on Friday at 1035 hours.

The test firing was witnessed by ADG Military Operations and Artillery and other Army and Air Force officials.

This was the 25th flight test of the advanced version of BRAHMOS missile system.

The flawless performance with high success rate establishes BRAHMOS as a unique missile breaking the records set by any other missile in the world.

The first regiment of the missile is fully operational with the Indian Army.

Defence Minister Shri A K Antony congratulated the Army for the successful test launch of the missile system.

Jointly developed by India and Russia, BRAHMOS can be launched from multiple platforms including submarines, ships, aircraft or land.

The ramjet propelled supersonic cruise missile flies at a top speed of Mach 2.8. It can carry conventional warheads up to 300 kg for a range of 290 km.

The submarine and air launch versions of the missile are presently under development.