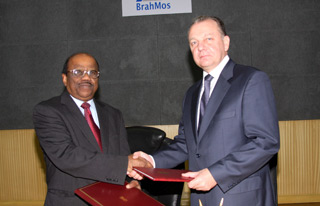 NEW DELHI: With an aim to maintain seamless supply of cruise missiles to the Indian armed forces, BrahMos Aerospace and Russian NPO Mashinostroyenia have signed a protocol to ensure there are no price escalation issues during the duration of the contract.

"Both sides have agreed to take necessary steps to secure the unconditional execution of the contracts for deliveries to the Indian armed forces. This makes it a first of its kind in the relationship between India and Russia that there would be no price escalation issue during the duration of the contract," BrahMos officials told PTI here.

Under the agreement, both sides pledged their readiness to work towards developing hypersonic version of the missile to maintain its leadership in cruise missiles, they said.

BrahMos is planning to develop a hypersonic version of the 290 km-range cruise missile, which would travel at speeds above 5 Mach.

The protocol has been signed by NPO Mashinostroyenia Director General and Designer General Dr. A G Leonov and BrahMos Aerospace CEO & MD Dr. A Sivathanu Pillai during the two day visit of Russian President Dmitry Medvedev to India.

The Russian side committed full support of its specialists to Indian industries for manufacturing elements of missiles which are presently not produced in India, officials said.

The missile has already been inducted into the Indian Army and t e Navy and the work on its air launched version is on.