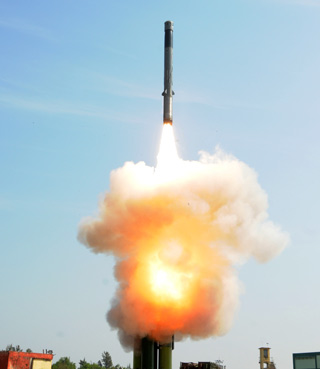 BALASORE (ORISSA): The launch of BRAHMOS Block III + version took place at 1055 hrs on Thursday from the Integrated Test Range at Chandipur in Balasore off the Orissa coast, India.

All the telemetry and tracking stations, including Indian naval ships positioned near terminal point, confirmed the accuracy of the mission and marked it as a “textbook launch.”

Defence Minister A K Antony congratulated the DRDO and BrahMos team for this highly successful launch of the new version of BRAHMOS.

“In this launch campaign, the 290-km range missile was put through extreme conditions and it successfully completed all complicated manoeuvres as envisaged in the battle field in mountain terrains following the exact flight path given to it,” Dr. A S Pillai, CEO & MD of BrahMos Aerospace, said.

The launch was executed from a Mobile Autonomous Launcher (MAL) by trained Army personnel.

High ranking Army officials who witnessed the launch congratulated the BrahMos and DRDO team for this achievement which will provide unmatched capabilities to the Indian Armed forces.

The BRAHMOS supersonic cruise missile can fly at 2.8 Mach and carry conventional warheads up to 300 kg for a range of 290 km.

BRAHMOS has already been inducted in the Indian Army and Navy.

The Times Of India