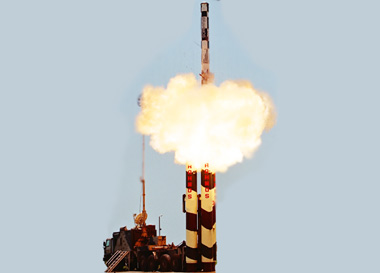 BALASORE, ORISSA: Today at 1135 hours the advanced version of BRAHMOS Block–II was tested successfully from the interim test range (ITR) at Chandipur.

The missile flew in the designated complex trajectory conducting large manoeuvres and steep dive. This is the first time in the world that a supersonic dive has been realised by a cruise missile.

Eye-witnesses from the Indian armed forces termed it as a perfectly precise flight.

The Defence Minister Shri AK Antony congratulated the armed forces and the defence scientists associated with the project with this success.

The launch was conducted in the presence of Director General of Artillery, Lieutenant General Vinod Nayanar; Dr. AS Pillai, CEO & MD, BrahMos Aerospace; scientists from DRDO and Industry representatives along with officers from different units of the army.

The sophisticated cruise missile has already been inducted into the Indian Army and Navy. The Block-II version capabilities to hit precisely a small target in a cluster of larger targets were demonstrated from Pokhran recently. This new capability has made it even more lethal.

The BRAHMOS missile is a two-stage vehicle that has a solid propellant booster and a liquid propellant ramjet system. The missile can fly at 2.8 times the speed of sound.

It can carry conventional warheads up to 300 kg for a range of 290 km.

The cruise missile is capable of being launched from multiple platforms based on land, ship, sub-marines and air, and currently the focus in on for the development of its air-launched and the submarine-launched versions.

The Voice of Russia

The Times of India