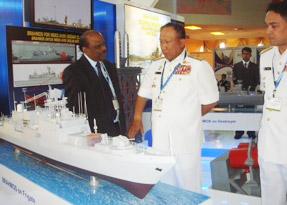 The ship-launched anti-ship version of BRAHMOS missile can fly at supersonic speed barely 3-4 meters above the surface of the sea making it ideal for stealth attack against enemy ships.

The missile which is being offered to Malaysia to be mounted on its new generation patrol vessels successfully completed its anti-ship test two months ago.

The technology behind the missile makes it a game-changer in the global arms industry. No other missile is capable of flying at match 2 plus speeds and yet skim the seas.

Its competitors for the Malaysian program, such as the Exocet missile made by MBDA can only fly at sub-sonic speeds making it vulnerable to counter-attacks.

The Malaysian Navy Chief of Staff, Admiral Abdul Aziz Bin Haji Jaafar visited the BrahMos pavillion at the DSA 2010 show. He showed keen interest in the ship-launched version of the missile and wrote in the visitors’ book, "We look forward to working jointly with BrahMos".